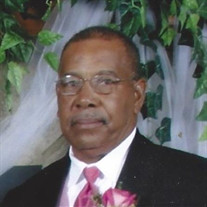 Willie James Pittman “Billy” was born on July 26, 1940 in Henry County, Georgia to the late Leroy and Lula Pittman. He was the second born of nine children. On October 27, 2019 he peacefully made his transition from earth to glory. At an early age he confessed his life to Christ and joined Mt. Olive Baptist Church, where he served faithfully until his illness. He was educated in the Henry County School System and over the course of his life was employed by Atlanta Boat Company (1958-1979) and Piedmont/US Airlines (1979-2002). In the early 70’s, he co-founded Pittman Body Shop with the help of his oldest brother Charlie. Billy was joined in holy matrimony to Mary Brooks on November 28, 1968 and to this union two sons were born, Enrico Pittman and Toboris Pittman. He was a devoted and loving husband, father and grandfather. His greatest joy and balance were his grandchildren and he loved supporting them in their numerous activities and endeavors. He was their Number One Fan. He also enjoyed spending time with his immediate and extended family, cooking, fishing and gardening. His love for these activities was evident by the many family and friends that benefitted from his delicious barbecue sauce, extra hot peppers and cabbage from his garden that always found itself on the table at family gatherings. He was preceded in death by his parents Leroy and Lula Pittman and his sister Eula Mae Ponder. He leaves to cherish his memories, his loving and devoted wife and best friend of 50 years, Mary Pittman; two children, Enrico Pittman (Shawnte) and Toboris Pittman (Tia); four grandchildren, Janae Pittman, DeVonte Palmore, Toboris “TJ” Pittman and Kaison Pittman; two sisters, Alice Pye and Dorothy Williams (Frank); five brothers, Charlie Pittman (Earnestine), Lorenzo Pittman (Rachel), Homer Pittman (Martha Jane), Robert Pittman and Randolph Pittman; three sisters-in-law, Evelyn Sales, Betty Welch, and Luevail Brooks; two brothers-in-law, Robin Brooks and Gary Brooks (Rosa); his godson, Fernando Davis (Vivian), his longtime fishing partner Earnest Stanley and a host of nieces, nephews and friends.

Willie James Pittman &#8220;Billy&#8221; was born on July 26, 1940 in Henry County, Georgia to the late Leroy and Lula Pittman. He was the second born of nine children. On October 27, 2019 he peacefully made his transition from earth to glory. At... View Obituary & Service Information

The family of Willie J. "Billy" Pittman created this Life Tributes page to make it easy to share your memories.

Send flowers to the Pittman family.