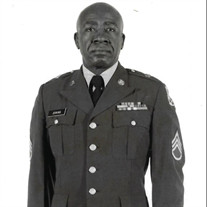 Celebration of Life Services for Willie Jenkins will be held on Sunday, October 3, 2021 at 12:00PM. These services will be recorded and streamed live. In the event the service is interrupted at any time due to technical issues, the entire service will be uploaded and available to view later in the day. Please copy and paste the link to share, or simply click on the link to view the service. https://vimeo.com/616952897 Sgt. Willie Jenkins was born on December 26, 1938 in Santee, SC. He was the eldest of four children born to the late John and Leolar Jenkins. When Willie was a High School student, his father moved the family from Santee, SC to New York City where they eventually settled at 286 Snediker Ave in Brooklyn, NY, the home that remains the cornerstone of Jenkins family history to this day. After receiving his High School Diploma, Willie played Minor League Baseball. He later enlisted in the US Armed Forces serving six years in the Air Force. Willie returned home and set his sights on making a difference in his community. He worked alongside many well known Civil Rights Activists such as Roy Innis as a leader in The Congress Of Racial Equality (C.O.R.E.) where he met his wife Mattie. He was amongst one of the first African American Bankers as the Manager of Freedom National Bank in Harlem, New York. Willie pioneered the family owned business "Jenkins Wines & Liquors'' in Brooklyn, NY. He Later returned to the US Armed Forces enlisting in the Army, where he eventually retired in 1995. Willie continued his quest for knowledge after retirement, acquiring two associates degrees, Christian Studies (2000) and Human Services (2003) from Stanley Community College in Albemarle, NC. Willie's passion for life, his thirst for knowledge and his commitment to family and community continues to live on through all he has touched. He will forever remain the ultimate example of a first born son, a patriarch, a man of principle, a father, a grandfather, an uncle, a cousin, a big brother and a friend. Daddy, Pop Pop, Uncle Willie, Jenk, Bubba, and Sarge will continue to impact the lives of generations to come as his legacy lives on through those who love him. Willie is preceded in death by his wife Mattie Jenkins, daughter Tracy Martin, parents John and Leolar Jenkins, brother James Jenkins and sister Sarah Leggett. He is survived by his two daughters: Kioka Walcott and Twauana Jenkins, one son-in-law: Glenn Walcott, seven grandchildren: Whittany Martin, Brandi Joyner, Ashia Jackson, Omari Walcott, Mykal Crew, Mattisyn Crew and Malachi Jenkins-Crew. Three grandchildren-in-love: Dallas Walcott, Blake Walcott & Dylan Walcott. Three great grandchildren: Jayonna Joyner, Khloe Jackson and Noah Crew. One brother Johnny Jenkins. And a host of nieces, nephews, cousins, in-laws, family, and friends.

Celebration of Life Services for Willie Jenkins will be held on Sunday, October 3, 2021 at 12:00PM. These services will be recorded and streamed live. In the event the service is interrupted at any time due to technical issues, the entire service... View Obituary & Service Information

The family of Willie Jenkins created this Life Tributes page to make it easy to share your memories.

Celebration of Life Services for Willie Jenkins will be held...

Send flowers to the Jenkins family.