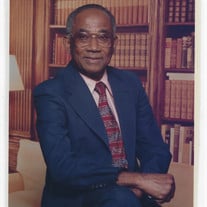 Vincent Leonard Tomlinson, age 94 of McDonough, Georgia passed away on Wednesday, April 8, 2020 at his residence. He was born on March 13, 1926 in Thornton, St Elizabeth, Jamaica, West Indies, to the late Stephen Uriah Tomlinson and Adelle Princella Rowe. Vincent was the oldest sibling of six children. On September 5, 1951, he married Verna Veronica Smith in Kingston, Jamaica, WI. Vincent trained in Kingston as a Master Mechanic and started his own business in foreign car repair. In 1963 heimmigrated to Brooklyn, New York USA, working with the Iranian, and later the Jamaican Embassy at the United Nations. He later became certified as an Automotive Engineer in the USworking for several large automotive corporations, until he started his own auto repair shop in Orlando Florida. He later retired in 2001. His hobbies included being an avid horticulturist, planting an extensive garden of fruits and vegetables, which he was proud to share. He loved telling stories to his children about living on the beautiful island of Jamaica, WI. Vincent was a faithful usher/greeter at his church, Faith Assembly of God in Orlando, Florida. He was recognized as an usher for his faithfulness and long service of over 25 years. Vincent is preceded in death by his son, Horace Anthony Tomlinson (Donnie) and younger brother Neville Tomlinson (Busha).Vincent is survived by his wife Verna, who he passionately call “V”, his 3 surviving children, Charmaine (Charm), Joan (Miss Jo), and Stephen (Stevie); son-in-law, Kevin; daughter in law, Kumiko; 6 grandchildren: Eleith, Nathaniel, Desiree, Kota Jeremiah, Zion Yuze, Anela Inori; 4 siblings Desmae, Una (Kitty), Edris, and Elaine (Pansy); and a host of nieces, nephews, grand nieces, grand nephews, and cousins. Interment will be held at 11:00AM on Friday, April 17th, at Eastlawn Memorial Park, McDonough, Georgia, officiated by Rev. Johnathan Criswell of McDonough First Assembly. Arrangements are by WD Lemon & Sons Funeral Home. A Memorial service will be held at a later date by the family. In lieu of flowers, contributions to the family may be forwarded to daughter Joan Brown, using PayPal to [email protected] The family of Vincent wishes to extend our sincere thanks to Dr. Alicia Grady and her staff, Bridgeway Hospice staff of nurses and aides, all family and friends who stopped in for visits, and the McDonough First Assembly Church family.

Vincent Leonard Tomlinson, age 94 of McDonough, Georgia passed away on Wednesday, April 8, 2020 at his residence. He was born on March 13, 1926 in Thornton, St Elizabeth, Jamaica, West Indies, to the late Stephen Uriah Tomlinson and Adelle... View Obituary & Service Information

The family of Vincent L. Tomlinson created this Life Tributes page to make it easy to share your memories.

Send flowers to the Tomlinson family.