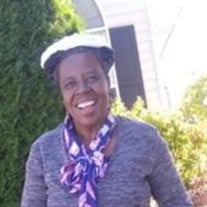 Beloved mother, sister, aunt, cousin and friend, Theresa Angella Hutchinson, age 63 of McDonough, Georgia, passed away on March 20, 2020. She was born on April 3, 1956 in the District of Silver Hill, Portland, Jamaica West Indies, the daughter of Mavis & Samuel Phipps. Theresa Hutchinson was the third of six children. Theresa attended Avocat Primary School for early education, after which she relocated to Kingston to live with her sister, Claribell and family. She then attended St. Annes Secondary School and Trench Town Comprehensive High School in Kingston, Jamaica. Upon graduation, she attended St. Joseph Teacher’s College. After graduating with a degree in Early Childhood Education, Theresa was employed with the government youth service program where she got her teaching experience. She then went on to teach at Waterford Primary and Bridgeport Primary respectively. After 44 years of teaching, Theresa retired and in 2016 migrated to the United States to join her sister and the rest of the family. She was a believer in Jesus and received Him as her Savior and was baptized in Jesus name. Theresa was a loving and compassionate person who loved to serve the Lord and often time would remind family that God would fix whatever stormy situation she was going through. Her faith in God was awesome. Most of all she loved and adored her one and only son, Andre, who was highly educated and also a believer in Jesus. They both lived God fearing lives – one that she carried out until her death. Therese wanted nothing for her son than the best and for him to have a wonderful life. Theresa is survived by her son, Andre; sisters, Claribell Scott and Idolyn Martin; brothers, Desmond Phipps and Raska Phipps; nieces, Carol Wolson, Rosealie Field, Paula Miles, Sandra Lafayette, Chinelle Phipps and Marcelee Phipps, nephews, Kirwood Lafayette and Danien Wyatt; grand niece, Cheyanne Lafayette; great grand niece and nephew, Aliyah Candidate Elijah Lafayette and many other great grand nieces and nephews. She will be greatly and sadly missed.

The family of Theresa Angella Hutchinson created this Life Tributes page to make it easy to share your memories.

Send flowers to the Hutchinson family.