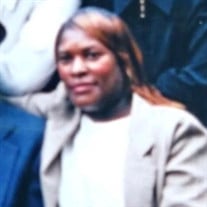 Theresa Ann &#8220;ReAnn&#8221; Goodrum was born on February 22, 1955 in Utica, New York. She was born to the late Mary Myrtis Goolsby Battle and Adam David Goolsby. She was one of eleven children. She departed her life on Wednesday March... View Obituary & Service Information

The family of Theresa Goodrum created this Life Tributes page to make it easy to share your memories.

Send flowers to the Goodrum family.