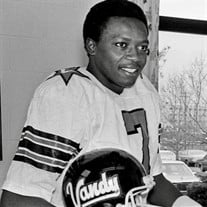 Minister, Pastor and Trailblazer Terence Van Heflin (Van the Man) was the first born son of the amazing Della Mae Powell Heflin (Mother Della) and the late Horace Van Heflin. Van has two brothers who preceded him in death, Victor Heflin, and Anthony (Skeeter) Heflin. And one brother, whom is still living, Kieve Leonard Heflin. And his childhood friend and sister in law Deborah Heflin. Born in Grady Hospital and raised in Mechanicsville, GA and Thomasville heights, where he attended Atlanta public schools Dobbs Elementary and Fulton High School, known as black magic in athletics. He was an all around athlete that specialized in Football, Basketball, Baseball, and Track winning all regional, All State, and All-District. Also academically he was outstanding, standing out in his class. He proceeded to acquire a full scholarship to Vanderbilt where he was reknown for his work ethic, continuing to dominate the playing field and becoming the first starting black Quarterback at a predominantly white and southern college institution, gaining a PH ED and a minor in Drama. He continued, after 5 years at Vanderbilt, to the NFL in 1985 to the Cleveland Browns, after that he was traded to the Washington Redskins, and continued to join the USFL, joining the Memphis Showboats. He retired soon after the USFL was canceled, although he could’ve went to the Green Bay Packers, he joined the car industry. He was named Mr. Sincerety in college, and was said to be the most honest, faithful and sincere. His faith was stronger than most, the lord called him to preach his word, later becoming a minister and pastor along side his late brother Victor. He worked faithfully through the word of god, only coming to the side of anyone and everyone who needed him. And held that faith, unquestionably, until his last breath. He had a love for the lord and the word of god that was unparalleled by those who surrounded. He was an inspiration to be around, always quiet but always attentive, having an intellectual philosophy that only deepened his selflessness and love for those he cared for. In 1982 he married Christyna Ferrell and welcomed his first daughter Francesca Heflin, whom he loved with all his heart. In 1993, with Carolyn Haywood, he was blessed welcomed his second daughter Terraya Haywood. In 1998, in his marriage with Deborah Ann Elizabeth Heflin, had his first son, Tyler Van Heflin. During his marriage with Deborah Ann, he fathered his non-paternal sons and daughter, Andrew Maurice, Jamie Maurice, Patrick Deshaumps, Joël Deshaumps, and Brianne Maurice, showing them love and empathy when they had just come into the country from Canada. He was tremendously loved by so many, including his loving family, Kieanna Heflin, Johnathon Heflin, Tobias McCrary, Antoinette Heflin, Jamal Heflin, Brianna Spanne, Jackie Jeter, Natasha Jeter’ Fountain, Cedric Jeter, Brandon “BB” Heflin, and a host of amazing nieces, nephews, aunts, cousins, neighbors, childhood friends, and people he simply took the time to help when he didn’t have to, and the countless people he inspired as the trailblazer he was. Van the Man Heflin was a loving, devoted and caring father and son who only wanted the best for those he loved with all his heart and being. Terence Van “the Man” Heflin leaves behind a tremendously groundbreaking, loving and impacting legacy, also leaving behind countless loved ones who will miss him. May you rest on Van Heflin, your work here is over, fly high old soldier. You’ll always be our hero.

The family of Terence Van Heflin created this Life Tributes page to make it easy to share your memories.