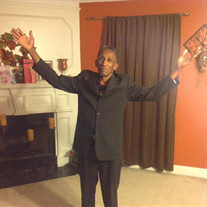 McDonough Chapel Robert L. Jones, Jr., who is known as Van to some and Bobby to others, was the only son born to the late Robert Jones, Sr., (who preceded him in death) and Mary Ellen Jones, on February 12, 1952 in Chicago, Illinois. Robert was a true humble servant of God who dedicated his life to sharing the love of Jesus Christ. He was active in his church, in the community, and with various outreach ministries which included feeding the hungry and the homeless. He had a great love for God, his family (especially his grandchildren and great-grandchildren) and Tabernacle of Praise, his church family. He just loved people! He had a talent for drawing. He loved to draw. Even as a child he would spend hours drawing pictures of cowboys. He inspired his youngest sister to become an artist. Robert’s most recent employment was with McDonalds Restaurant in McDonough, GA where he befriended many employees and customers until he received his final earthly calling. He believed in a great God and his church, Tabernacle of Praise. On May 19, 1982, Robert married the love of his life, Brenda Cloud. And to this union a son was born. Robert’s earthly mission has been completed and his journey came to an end on January 2, 2019. God made no mistake when he called him home. He leaves to cherish his memories: a loving wife, Brenda Cloud Jones; his son, Jaylon Jones; his daughter, Amelia Freeman (Masio); his mother, Mary Ellen Jones of Chicago IL; his two sisters, Daphney Hilson and Tia Etu , both from Chicago IL; 6 grandchildren: Nakia, De’Eric, DeErrius, Adarrius, Todey, GeKhaiyah; 8 great-grandchildren: JyKearrion, JyVon, Zuri, Aayden, JaKaiya, Legynn, Zymon, Kassidy (deceased); nephews, Michael Hilson and Skylar Jones (Corrine); niece, Danielle Hilson; Sisters in-law: Bertha Cloud, Alice Williams Willie Ruth Carnell, Diann Crawford, Cathy Ponder, Brothers in-law: James Cloud; Carl Ted Crawford and a host of other devoted relatives and friends.

McDonough Chapel Robert L. Jones, Jr., who is known as Van to some and Bobby to others, was the only son born to the late Robert Jones, Sr., (who preceded him in death) and Mary Ellen Jones, on February 12, 1952 in Chicago, Illinois. Robert... View Obituary & Service Information

The family of Robet Lee Jones Jr. created this Life Tributes page to make it easy to share your memories.

Send flowers to the Jones family.