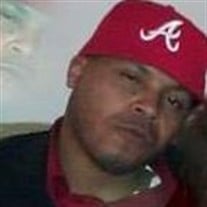 McDonough Chapel Robert Earl Arnaud, a resident of Jonesboro, Georgia was born on October 3, 1976, in Lawton, Oklahoma, to Bobby Arnaud Sr. and Beverly Arnaud. He passed away September 10, 2019, in Jonesboro, Georgia. Robert graduated from Morrow High School in 1995 as a Blue-Chip All-American running back/linebacker and excelled in both track and field. Robert continued his education at the University of Georgia from 1995-2000. While pursuing his degree at the University of Georgia he participated in track and football. Robert had a very successful career as a running back and strong safety, then left to pursue a professional career with the Baltimore Ravens. He played for the Ravens from 2000-2003 and obtained a Super Bowl Championship in 2001. Robert also had the opportunity to play with the New Orleans Saints, Washington Redskins, Seattle Seahawks, Tampa Bay Buccaneers, and the Scottish Claymores. He received a Specialist degree in Curriculum and Instruction from Lincoln Memorial in 2013. He worked 11 years as a teacher at Excel Academy and was awarded Teacher of the Year in 2016. He also coached football at Eagles Landing Middle School and Henry County High School. Robert enjoyed many facets of life, especially spending time with family and friends. He was a man of substance whose love and care for others proved itself in his everyday walk of life. He tirelessly extended his love to everyone with a warm heart and always opened his home. He was an amazingly strong man with a contagious spirit and outgoing personality. Robert leaves to cherish his memory: his father, Bobby Arnaud Sr., Jonesboro, GA; brother, Bobby (Kanundra) Arnaud Jr., Jonesboro, GA; sisters Andrea (Brett) Price, Jonesboro, GA; and Gail Arnaud, San Antonio, TX; nieces Alexus Arnaud, Aaniyah and Kylie Price; nephews Bobby III and Jordan Arnaud; Godchildren Lord II and King Foster and Joi and Jayden Jenkins; best friends of many years, Marcus Stroud, Shannon Foster, and Roger Ransom; grand parent Joe Jones, and a host of aunts, uncles, cousins, and friends. He was preceded in death by his mother Beverly Arnaud. Final Arrangements Entrusted to: Rowell-Parish Mortuary 611 N. 9th Street Fort Smith, AR 72901 479-782-9200

The family of Robert Earl Arnaud created this Life Tributes page to make it easy to share your memories.

Send flowers to the Arnaud family.