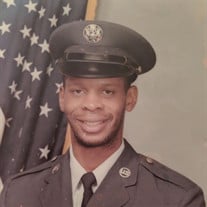 Celebration of Life Services for MSgt. Michael A. Grissett, USAF, (Ret) will be held on Saturday, July 31, 2021 at 11:00am. These services will be recorded and streamed live. In the event the service is interrupted at any time due to technical issues, the entire service will be uploaded and available to view later in the day. Please copy and paste the link to share, or simply click on the link to view the service. https://vimeo.com/579942115 The Journey of Life Michael's journey of life began on March 1, 1958. Our Almighty God allowed him to impact many lives throughout his journey that ended so abruptly on July 22, 2021. He was a loving, caring, and supportive father to his four children. Michael was called by many names. He was affectionately called “Husband” by his loving wife Yvonne. He was called “Dad” by his children and was called "Tony" by his loving mother and other family members. Michael was the oldest of his two siblings. He was a devoted member of the Tuskegee Airman Motorcycle Riding Club and was affectionately known as "Big Mike". As a member for XX years, he was raised to "Road Captain". Lastly, he was a coach for many years and exhibited his leadership qualities by coaching AAU basketball to the youth. Throughout life of Michael Anthony Grissett, many people looked to him for encouraging words and straight-forward advice which he gave willingly, lovingly, and without expecting anything in return. Michael was a student-athlete and played basketball at Ramsey High School. After graduating from Ramsey High School in 1976, he attended Lincoln University, where he continued to play basketball. . He joined the United States Air Force and retired after 20 years of serving his country. While in the military, he continued to play basketball for many years. Michael then furthered his education with an Associates’ Degree in Applied Science. His quest for higher education did not stop there. He also earned his Bachelors of Science Degree in Professional Aeronautics from Embry-Riddle Aeronautical University. Michael was currently employed as a Civil Servant at Robbins Air Force Base, Georgia for 15 years. He is preceded in death by his father David Grissett, paternal grandmother Ruby Grissett Wood, maternal grandfather Bonnie McKinney, maternal grandmother Zadie McKinney. Michael is survived by the love of his life, best friend, soulmate, companion, devoted, and infinite loving wife Yvonne, his precious children Mikia Grissett, Mikel Grissett, Paris Grissett, and Trey Grissett along with two blended son's, Leother Burge, Jr. and Terrell Walker, his two inherited grandchildren, Sydney Walker and ZiQuan Burge, a faithful, caring, and loving mother Hazel Grissett, his devoted, loving sibling Sheila Grissett Davis (Dennis), and Chris Grissett (Minnie), and his one and only special, loving niece, Gabriele Grissett. He is also survived by Elmore McKinney and Michael McKinney, and a host of extended family and friends, classmates, and his Tuskegee Airmen Motorcycle Group who he loved dearly. Michael was a sports fanatic. He loved Houston County High School football where his son Trey played. He loved Alabama Crimson Tide "Roll Tide" and was a die- hard Dallas Cowboys fan.

Celebration of Life Services for MSgt. Michael A. Grissett, USAF, (Ret) will be held on Saturday, July 31, 2021 at 11:00am. These services will be recorded and streamed live. In the event the service is interrupted at any time due to technical... View Obituary & Service Information

The family of MSgt Michael A. Grissett, USAF, (Ret) created this Life Tributes page to make it easy to share your memories.

Celebration of Life Services for MSgt. Michael A. Grissett, USAF,...