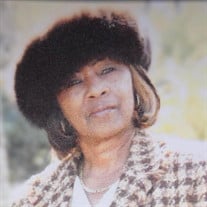 Margaret was born on March 25, 1938 in Pine Bluff, Arkansas to the late Edgar McCollum and Marie Perry. She moved to Michigan at the age of 2. She attended public school system and graduated from Northern High School then later attended GOIC Business School. Margaret gave her life to Christ at an early age at Spring Hill Missionary Baptist Church in Detroit, Michigan. Throughout the years she enjoyed serving in various roles within the church. She was always faithful and committed to the ministry. She met and married the Late Rev. Richard Coe, Jr. in 1959. Out of that union came two sons and three daughters. Margaret worked at the Detroit Sympathy Orchestra as a Receptionist and retired after 17 years. She then became employed with the Black Family Development Incorporation, helping thousands of families throughout the metropolitan area of Detroit. She was loved by everyone on her job. She was the face and the voice of Black Family Development until she retired again, after 17 more years, in 2009. Margaret moved to Georgia to be closer to her children who were already established in Georgia. She enjoyed spending time with her children, grandchildren and great grandchildren. Margaret loved her family and friends both near and far. All of her family was very important to her. Margaret visited several churches before she made her home at Shiloh Baptist Church where she faithfully worked on the Pastor’s Aide Committee. She joined the Red Hatter’s Chapter in McDonough, where she enjoyed the fellowship and sisterhood. Margaret was very active and enjoyed physical work-outs at both the Heritage Senior Center and at the church. She also enjoyed cruising and traveling around the world, but her all time favorite was playing the games in the Casinos. Margaret battled with a health condition for the past 5 years, in which she remained strong in her faith until the end. Shedeparted this life on Tuesday, March 3, 2020, at her home surrounded by her loving family. She leaves to cherish her memories: A special brother, Reginald Witherspoon, her two sons, Howard McCollum and Richard Coe, III (Diane); Her two daughters, Cenita Coe and Sereatha Nobles (Eugene); Special Daughter Clara Denise Perry; 7 Grandchildren: Keyana Crossley, Cierra Coe, Erica Coe, Richard Coe, IV, Varnell Coe, Alex Perry, Michael Perry and 12 Great grandchildren; and a host of cousins, family members and friends.

Margaret was born on March 25, 1938 in Pine Bluff, Arkansas to the late Edgar McCollum and Marie Perry. She moved to Michigan at the age of 2. She attended public school system and graduated from Northern High School then later attended GOIC... View Obituary & Service Information

The family of Margaret Jean Coe-Collins created this Life Tributes page to make it easy to share your memories.

Send flowers to the Coe-Collins family.