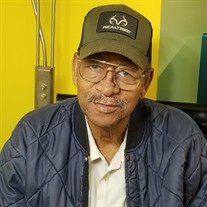 Graveside Celebration of Life Services for Maner Thompson will be held on Thursday, September 2, 2021 at 11:00AM. These services will be recorded and streamed live. In the event the service is interrupted at any time due to technical issues, the entire service will be uploaded and available to view later in the day. Please copy and paste the link to share, or simply click on the link to view the service. https://vimeo.com/594978456 Maner Thompson, Sr. was born in Trenton, Florida September 9, 1942 to the parentage of Oscar Thompson and Addie Bell Kendall Thompson. Maner, also affectionately called “Toby” was educated in the Upson County School System and was later employed by Upson Tech. He was also a skilled Welder. He left Thomaston in the late 1960’s and worked at Greater New York Blood Services for over 50 years until retirement. On June 6, 1991, he married Juana Mejia in New York. Through that union two children were born, Oscar and Darlene. His hobbies included fishing, cooking and grilling out and gardening. This was his way of bonding with family and friends. After retirement he moved back to Georgia in 2012 to continue his hobbies and to enjoy his extended family. He was preceded in death by his sister, Willie Bell Allen, brother John Henry Thompson, daughter Tracy Thompson, granddaughter Jamilia Thompson Duffy and his niece Gloria Williams. He leaves to cherish his memory his children, MaShanda Thompson, Thomaston, GA, Maner Thompson, Jr. (Chandra), McDonough GA, Elizabeth Howard (Frank), McDonough, GA, Christopher Walker (Yolita), Detroit, MI, Vanessa Thompson, Bronx New York, Michael Thompson, Bronx, New York, Oscar Thompson, Virginia Beach, VA, Darlene Cowell-Pettway (Kirieff), Brooklyn, New York, sister, Kitty Darlene Thompson, Thomaston, GA, a very special longtime companion Ruth Garcia Masonet, McDonough, GA., 12 grandchildren and 4 great-grandchildren, a host of nieces, nephews and other relatives.

Graveside Celebration of Life Services for Maner Thompson will be held on Thursday, September 2, 2021 at 11:00AM. These services will be recorded and streamed live. In the event the service is interrupted at any time due to technical issues,... View Obituary & Service Information

The family of Maner Thompson created this Life Tributes page to make it easy to share your memories.

Graveside Celebration of Life Services for Maner Thompson will...

Send flowers to the Thompson family.