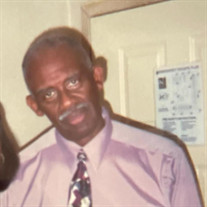 Celebration of Life Services for Julian Carter will be held on Thursday, March 10, 2022 at 1:00PM. These services will be recorded and streamed live. In the event the service is interrupted at any time due to technical issues, the entire service will be uploaded and available to view later in the day. Please copy and paste the link to share, or simply click on the link to view the service. https://vimeo.com/685473730 Our father Mr. Julian Leroy Carter, was born on March 10,1944 to Eleanora Gittens Carter and Beltram Carter in Brooklyn, New York. He received his formal education at William E. Grady Vocational and Technical High School in Brooklyn, New York. Our father was an athlete and was the captain of the track and basketball team. His course of study was Cabinet Making. He received merited graduation and his diploma in June of 1962. November 12, 1964 he enlisted in the United States Army. He received his Marksman Badge for the Rifle. He also received the National Defense Service Medal, Vietnam Service Medal and Vietnam Campaign Medal. His character of service was honorable. Mr. Julian Leroy Carter was employed by Tribeca and Merrill Lynch as a chauffeur and driver for several years. In his leisure time he enjoyed going to the bowling alley. He was an avid and very talented bowler. He liked going to parks, walking, casinos, playing cards with friends and traveling. He especially loved spending time with family and close friends. On Friday, February 25, 2022 at 1:58 pm our father Jay transitioned to the next phase of his life at the Atlanta VA Medical Center with his daughters, Tennile and Monique and niece, Michelle by his beside. We held our father’s hands as he set off on the next big journey of his life. Our father was a true fighter in every aspect. Our father lived such a rich and full life. Full of love, laughter, adventure and excitement. Jay was a great brother, uncle, father, and grandfather to his loved ones. He is survived by his beloved daughters, Monique Carter, Tennile Tolliver and Nikka Miller; his sisters, Vera Carter and Olga Killiebrew; nieces, Michelle Taylor and Fabyane Carter; sons-in-law, John Miller and Harvey Jackson; grandchildren, Jaliyah Jackson, Talena Carter Jackson, Kwame Agyeman and Jorden Miller; and a host of family and friends.

Celebration of Life Services for Julian Carter will be held on Thursday, March 10, 2022 at 1:00PM. These services will be recorded and streamed live. In the event the service is interrupted at any time due to technical issues, the entire service... View Obituary & Service Information

The family of Julian Leroy Carter created this Life Tributes page to make it easy to share your memories.

Celebration of Life Services for Julian Carter will be held on...

Send flowers to the Carter family.