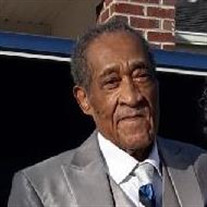 Funeral Service for Mr. John Henry Reid will be held at Griffin Memorial Gardens in Griffin, GA at 11:00 a.m. on Tuesday, June 9, 2020. This service will be streamed live using Zoom. Please share the link, copy and paste it into your browser or simply click on the link below to view the service. Topic: John Reid Graveside Service Time: Jun 9, 2020 10:30 AM Eastern Time (US and Canada) Join Zoom Meeting https://zoom.us/j/93297177056?pwd=aFNVL2lsUXk0QkFDMXI2WS9IYW5RUT09 Meeting ID: 932 9717 7056 Password: Love John Henry Reid, known to many as Grandpop, was born in Hampton, GA on November 9, 1932 to the late Lillie Mildred “Mo Lillie” and Otis “Papa” Reid. John attended school in Hampton, GA. He enlisted into the United States Military in 1950 and served for 2 years where he was a Private in the Army during the Korean War. He received an Honorable Separation with a National Defense Service Medal, Korean Service Medal, and United Nations Service Medal. Once he returned home, he worked 38 years for Southern States in Hampton, GA. He retired at the age of 62, but continued to work for Camp Fortson and the Henry County School System. He loved to play checkers, read Jet Magazine, watch action movies, and once he knew what got under your skin, he loved to tease you. He was also an avid movie trivia buff. You could always find Grandpop sitting in his chair donning a baseball cap from his collection and watching the news, the Braves, talk shows, or court shows. His family knew him as a kind, mild mannered man who supported his family tremendously and never complained. Grandpop was a man of few words, but once you got him to talk, it was always a pleasure to learn of his time in the military, stories with his wife, and raising his family. He loved to reminisce about his grand and great-grandchildren, and had a knack for nicknames. John died peacefully in his home surrounded by family in Hampton, GA on Tuesday, June 2, 2020 at the age of 87. He was preceded in death by his daughters Renae Reid and Sureatha Shawnae (Reid) Kelly; brothers, Arnicous Reid, Leroy Reid, Lorenzo Reid, Otis “June” Reid, Jr., MC Reid, and Herman Reid; sisters Willie Otlia Reid, Fostine Jinks, Nellie Reid, Mildred Bell, and Annie Ruth Dorsey. He is survived by his loving wife Lizzie Bell Reid in which they shared their love in marriage for 61 years. John was introduced to Bell by his brother Herman in McDonough, GA. They were married on August 2, 1958 and raised a beautiful family. John leaves to cherish his memories: daughters, Rosa Davis (James) of Ellenwood, GA, Shirley Allen (Camera) of Hampton, GA, and Angela Parks (Randy) of Atlanta, GA; sons, John Reid (Jeanetta) of Hampton, GA, Randy Reid of Hampton, GA, Michael Reid (Sheila) of Chattanooga, TN, and Herman Reid (Tomyke) of Hampton, GA; thirty grandchildren, thirty-six great-grandchildren, and one great great-grandchild; sisters, Florine Rowe of Columbia, SC and Mary Francis “Sis” Brown (Richard) of Dayton, OH; a host of nieces, nephews, cousins, other relatives, and friends.

Funeral Service for Mr. John Henry Reid will be held at Griffin Memorial Gardens in Griffin, GA at 11:00 a.m. on Tuesday, June 9, 2020. This service will be streamed live using Zoom. Please share the link, copy and paste it into your browser... View Obituary & Service Information

The family of John Henry Reid created this Life Tributes page to make it easy to share your memories.

Funeral Service for Mr. John Henry Reid will be held at Griffin...

Send flowers to the Reid family.