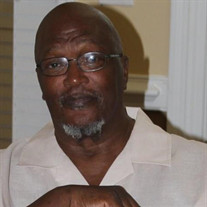 John Alvin Gaston died peacefully at his home on March 29, 2021. He was born May 13 1946, in McDonough, GA to Bill and Ruth Gaston. He attended Henry County Primary School and went on to graduate from Henry County Training School. At Henry County he excelled at many sports, Football, basketball, track and field. Eventually his talents earned a football scholarship to Fort Valley State University. Johnny always had a passion for arts. His talents were effortless from the stroke of a paintbrush to being a vocalist in a traveling cover band along with his older brother and classmates. He traveled many paths in his life that eventually led him to the lord. In his younger years he found his spiritual home at Shiloh Baptist Church. He was a God-Fearing man whose love for the lord radiated from him as bright as his smile did. Johnny had an anecdote from every walk of his life. From his all-star athleticism down to coaching both of his son’s recreational football teams. He made sure he was involved with all of his children, and whatever dreams they may have had. He loved his Grandchildren with his whole heart. He was a very proud uncle to many nieces and nephews. Eventually John went on to meet his wife Kathy, and they eventually went on spend 42 years together until Johnny gained his heavenly wings. Up until his last days he always found a reason to smile he could light up a room just by simply entering it. His positivity was contagious. John was everything that you imagined good to be. He loved his family leaving behind his wife Kathy Gaston. Siblings: Calvin Gaston (Julia Gaston), Children: Rory Gaston (Lynda Gaston), Mario Harris (Candice Harris), Cassius Gaston, Ryan Downing (Anthony Downing). As well as leaving behind his Grandchildren Jordan Gaston, Rory Gaston Jr., Madison Harris, and Rylie downing, and a host of nieces and nephews. He’s preceded in death by his son Caleb Gaston, granddaughter Jadyn Gaston, Brother Willie Floyd, sister Regina McDaniel, and parents Bill and Ruth Gaston.

John Alvin Gaston died peacefully at his home on March 29, 2021. He was born May 13 1946, in McDonough, GA to Bill and Ruth Gaston. He attended Henry County Primary School and went on to graduate from Henry County Training School. At Henry County... View Obituary & Service Information

The family of John Alvin Gaston created this Life Tributes page to make it easy to share your memories.

Send flowers to the Gaston family.