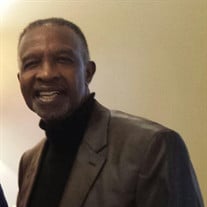 James Macklin “Mack” Welch, a mentor to many and friend to all, was born on May 15, 1942 in McDonough, Ga to the great late John D. and Ruby Welch. He passed away peacefully at Piedmont Henry Hospital on Monday, May 25, 2020. Survived by his loving and devoted wife, Sallie Welch for 60 years. Mack accepted Jesus Christ as his Lord and Savior at an early age and was a devoted choir member and ordained Deacon at Shiloh Baptist Church in McDonough, Ga. He later joined Mt. Nebo Baptist Church in Atlanta, Ga. where he faithfully served as a deacon in the church until his declining health. Mack was a pillar of his community and a strong foundation for his family. He was an amazing provider to his wife and kids and a father to extended family members who nicknamed him “Daddy Mack.” He worked passionately as an entrepreneur and with Kmart Distribution Center for over 25 years. Upon retirement in 2000, he co-founded and created the vision of JNJ Transportation Services with his son James “Adair” Welch and daughter-in-law Dianne Welch, which is now one of the largest nationwide minority owned ancillary service providers in the Worker’s Compensation Insurance Industry. Mack was a lover of people and never met a stranger. He embraced everyone he came in contact with as a family member. His favorite pastime was entertaining his family and friends with love, humor and eating “HOT” food from his beloved wife’s kitchen. Every year, for decades, he would take his family and loved ones on vacations and trips to create memories that would last a lifetime! His favorite time of the year was celebrating his wife birthday on Christmas with his grandkids and watching their eyes light up! He was always the life of the party and truly lived life to the fullest and inspired others to do the same. He was preceded in death by his daughter Janise Welch; sister, Etheleen Welch and brother, J.D. Welch Jr. Mack is survived by his devoted wife Sallie Welch, three daughters, Janet Talton (Tyrone), Lolita Welch, and Andrea “Tiny” Hopkins (Mark) and one son, James “Adair” Welch (Dianne). He’s the proud grandfather to Carletta Weldon, Ashley and Alex Talton, Alea and Brianna Welch, and Jada Hopkins. Three adopted granddaughters Brittany, Arielle and Gabrielle Kilgore and two great grandchildren, Kai Ikhine and Ava Talton. Further survived by a loving sister Barbara Reddick, sister in-laws and a host of nieces, nephews, cousins and friends. To have known “Mack” Welch, is to have loved “Mack” Welch! We are all the better because of you and the legacy you left in our hearts!

The family of James Macklin Welch created this Life Tributes page to make it easy to share your memories.

James Macklin “Mack” Welch, a mentor to many and friend to all,...

Customized sympathy cards. Mailed for you.