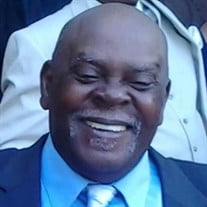 McDonough Chapel Henry Harris was born on February 5, 1940 in Henry County, GA to the late Eddie Lee and Ebbie Lou Harris. He was the second born out of nine children. On October 17, 2019 Henry peacefully made his transition from this earth to glory. At an early age he confessed his life to Christ and joined Mt. Olive Baptist Church under the leadership of the late Rev. A. Bell. Henry attended the Mt. Olive School and then Henry County Training School before he decided to join the work force. Henry united in holy matrimony to the late Mrs. Catherine Watson Harris. To this union seven children were born: Kathy, Cynthia, Henry Jr., Harold, Darlene, Geraldine and Cedric. In 1983 Henry decided to step out on faith and start his own business, H & H Masonry. After many years of hard work and dedication, he decided he would retire and began to do what he loved, hunting and fishing. Within his community he acquired the nicknames “Daniel Boone” and “Big Lake”. Henry began to have a fish fry in his back yard every year to show love to the people in his community. Over time this event became so large he had to start hosting the event at the Rufus Stewart Park in McDonough, GA. Henry did this for 20 years based on the inspiration of this scripture: “Taking the five loaves and the two fish and looking up to heaven, he gave thanks and broke them. Then he gave them to the disciples to distribute to the people. They all ate and were satisfied, and the disciples picked up twelve basketfuls of broken pieces that were left over.” Luke 9:16-17 After the passing of his wife, Henry later met and married Charlene Boyce Harris on March 1, 2006. From this union he gained two stepsons, Antonio Boyce and Tirrell Ponder. On July 22, 2019 Mayor Billy Copeland and the City of McDonough honored Henry for his love and compassion for the community he lived in and for the annual fish fry that he hosted. Now July 22nd will be forever known as Henry Harris Day in the City of McDonough. Henry was preceded in death by his father Eddie Lee Harris, mother Ebbie Lou Harris, 2 brothers: Eddie Lee Harris Jr. and Herbert Harris. Henry leaves to cherish his memories, his loving wife of 13 years, Charlene Boyce Harris; seven children, Kathy (John), Cynthia, Henry Jr. (Felinda), Harold (Linda) Darlene (Bobby), Geraldine and Cedric; two stepsons, Tirell Ponder (Alisha) and Antonio Boyce; seventeen grandchildren; twelve great grandchildren; step grandchildren; a brother, Oscar Lee Harris (Helen); five sisters, Flora Watson (James), Henrietta Hill (Lonnie), Emma Duffie (Aaron), Dicey Etheridge (Isaac) and Callie Strikland; brothers in law, Melvin (Essie), Willie and Michael (Vanessa): sisters in law, Gloria, Barbara, Ada, Michelle (Charlie), Sharon, Karla (Stephen) and Connie; a host of nieces, nephews, other relatives and friends.

McDonough Chapel Henry Harris was born on February 5, 1940 in Henry County, GA to the late Eddie Lee and Ebbie Lou Harris. He was the second born out of nine children. On October 17, 2019 Henry peacefully made his transition from this earth... View Obituary & Service Information

The family of Henry Harris created this Life Tributes page to make it easy to share your memories.

Send flowers to the Harris family.