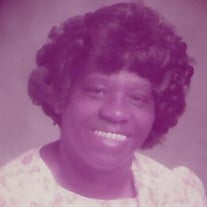 Frances Lummus was born on Friday, September 5, 1924 in McDonough, Georgia to the late Dock Douglas Moseley, Sr. and Mary Pearl (English) Moseley. She was the youngest of four children. Her early education began in the Henry County School System.... View Obituary & Service Information

The family of Frances Moseley Lummus created this Life Tributes page to make it easy to share your memories.

Send flowers to the Lummus family.