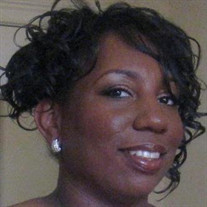 Faya Ifê Major Paul was born in historic Selma, Alabama, on March 16, 1977. She was the daughter of Raymond Major and Fannie (Major) McKenzie. She departed this life on June 14, 2021, while performing work-related duties in her home office... View Obituary & Service Information

The family of Faya Ife' Paul created this Life Tributes page to make it easy to share your memories.

Send flowers to the Paul family.