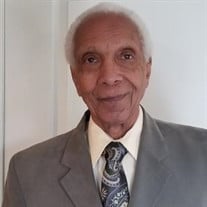 Eugene Springer was born on November 13, 1928 to the late Millicent Hunt Springer and Gerald Springer in New York City. He was the youngest of three children all have preceded him in death. On October 21, 2021 Eugene peacefully made his transition from earth to glory. Eugene better known as Gene was educated in New York City. He graduated from High School and went on to marry the late Loretta Billups Springer on July 1, 1949. From that union they had three children, Yvonne, Reggie and Tony. Reggie preceded him in death and it nearly broke his heart, but with the Lords help he came out on the other side stronger. Gene was a kind and loving man who would do anything for his family and was always willing to help those in need. He never met a stranger and would help anyone that he could. He enjoyed being around his friends, he was a generous and loving friend and neighbor. Everyone knew that they could count on him. Gene found the Lord late in life, but once he did, he was a devoted Christian. He professed his love of the Lord to anyone that would listen. Gene’s health began to decline in 2019 and he moved to McDonough Georgia to live with his daughter Yvonne and her husband Al. He hated Georgia when he first arrived, Gene was a native New Yorker at heart and missed the fast pace of the big city. Georgia soon grew on him after he started attending Mt. Olive Baptist Church, he loved hearing Pastor Gattis preach. Gene was a loving and kind hearted man who loved jazz, loved to play chess and a die heart Jets fan. More than anything Gene loved to walk; he would walk several miles every day until his health declined. Gene leaves to cherish his precious memories his daughters Yvonne Duncan (Al) and Adrienne Foster. Sons Tony Springer and Graig Springer. Grandsons Reggie Jr. Springer, Tony Jr. Springer, and Bobby Foster. Granddaughters Nicole Barber (Shawn) Danielle Plaugher (Jeremy) Brittney Foster, Raven Foster, Sharde’ Foster, and Ellianna Springer and nine great grandchildren, Niko, Noah, Zaera, Deacon, Xander, Cade, Natalie, Raven and Emmy, and Thomas Mason who was like a son.

Eugene Springer was born on November 13, 1928 to the late Millicent Hunt Springer and Gerald Springer in New York City. He was the youngest of three children all have preceded him in death. On October 21, 2021 Eugene peacefully made his transition... View Obituary & Service Information

The family of Eugene Springer created this Life Tributes page to make it easy to share your memories.

Eugene Springer was born on November 13, 1928 to the late Millicent...

Send flowers to the Springer family.