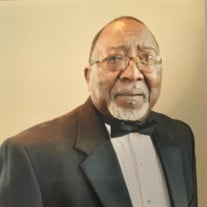 Eugene Edwards: A Walk Through Time May 4, 1942 was a remarkable day in Allendale, South Carolina. On this day, the world received an extraordinary baby boy who would grow up to be an even more extraordinary man. The baby boy born on this day to the late Mary Elizabeth Burgess and Walter Edwards was Eugene Edwards. This is his story. Eugene and his family left Allandale for Hallandale, Florida in 1950. The fifth of nine children, Eugene was both playmate to his older siblings and protector of his younger siblings. His childhood days were spent attending Lanier Elementary School and Lanier Junior High School before being bussed to Attucks High School in Hollywood. It was at Attucks where a young, serious-minded, ambitious, and determined Eugene caught the eye of a studious and equally ambitious, yet more reserved Annette Hardge in 1960. Eugene and Annette would form a bond that would strengthen through the years and last for six decades. The high school sweethearts were married April 3, 1965 at Bethel Baptist Church in Dania, Florida. Two years later, they welcomed their first child, Michael Eugene in September 1967. This was a period when Eugene was focused on providing for his new family and was equally determined to continue his education. While he worked full time as a Master Plumber, he also attended Florida Memorial College in Miami at night and on weekends. When the 1973-1975 recession hit, Eugene had to forego his dream of a college degree to sustain his family. March 1976 saw the addition of a baby girl, Monique Shikita, to the Edwards family. His two children were the love of Eugene’s life and he continue to make sacrifice after sacrifice to ensure their success in life. Both remain eternally grateful to their Dad to this day. Eugene was a dedicated servant to his Lord and Savior, Jesus Christ. Ordained a Deacon in the Baptist Church in February 1985, Eugene worked tirelessly to carry forth his faith in God and to live a life filled with love, kindness, and compassion for his fellow man. 1997 was a turning point in Eugene’s life. With two years of study completed toward obtaining his Bachelor’s degree, he enrolled in Brenau University in Gainesville, Georgia in 1997 and graduated May 1, 1999 with his Bachelor of Science degree. Upon achieving the life-long goal of graduating from college, Eugene joined the Dekalb County Government, Parks and Recreation Division in the role of Master Plumber in 1999. He would remain there until his retirement from Dekalb County in 2009. Retirement for Eugene was not a time to settle down and take it easy. For him, it was a time to get back to work to make a difference in his community. In 2007, he won election to become President of the Henry County National Association for the Advancement of Colored People (NAACP), taking office on January 1, 2008. Looking back at his tenure as President, he was truly the trailblazing community leader Henry County needed. As President, his mission was to ensure equal rights for all Henry County residents. Eugene knew the key to successfully fulfilling this mission required the formation of strong community relationships with local political leaders, education leaders, religious leaders, law enforcement, and the local judiciary. Even in the face of opposition, he courageously built community alliances that strengthened the influence and impact of the local NAACP branch that garnered statewide attention and support. Eugene relinquished the role of President on December 31, 2018 and took on the role President Emeritus. Much of Eugene’s life was dedicated to helping others. Whether it was offering a helping hand to a family member or friend, serving as little league football coach helping young men understand the concepts of discipline and team, or serving Henry County residents working to build a brighter future for his fellow citizens, Eugene Edwards was truly an extraordinary person. His smile and ever giving heart will be missed by his loving wife of nearly 55 years Annette Hardge Edwards, his children, Dr. Michael Edwards (Anna) and Monique Edwards, his grandchildren Shani F. Edwards, Ian Edwards and Malia Edwards, brother James Edwards (Lois), sisters Elizabeth Howard and Joyce Edwards, a host marital relatives who were more like blood relatives than in-laws including bothers-in-law John E. Hardge, Jr. (Virginia), Charles Hardge (Shirley), Sylvester Hardge (Geneva), Ronald Hardge (Phyllis), Donald Hardge, Bernard Hardge (Sharon), sisters-in-law Aletha Player and Bobbie Walker, and countless cousins, nephews, nieces, and friends.

Eugene Edwards: A Walk Through Time May 4, 1942 was a remarkable day in Allendale, South Carolina. On this day, the world received an extraordinary baby boy who would grow up to be an even more extraordinary man. The baby boy born on this... View Obituary & Service Information

The family of Eugene Edwards created this Life Tributes page to make it easy to share your memories.

Eugene Edwards: A Walk Through Time

Send flowers to the Edwards family.