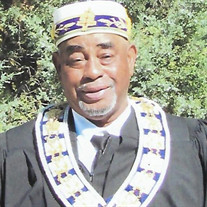 Deacon Ernest Lee McKnight Sr. was born on July 24, 1946, to the late Ernest Lucas McKnight and the late Annie Lee Smith in Locust Grove, Georgia. He was called from labour to reward on March 14, 2020. He was preceded in death by his wife Ernestine H. McKnight and his sister Alberta Stroud. Ernest received his education from the Henry County school system and graduated from Henry County Training School in 1964. At a young age, Ernest joined Bethlehem Baptist Church. During those years, he had established himself in many church organizations. Under the leadership of Reverend Carl Liggins, he was ordained as a deacon on July 8, 2007, where for a little over the past seven years he was the secretary.His surmountable faith led him to teach Sunday School for many years; moreover, in the last year he was the Assistant Sunday School Superintendent. With his need for service in his church, he was the Chairman of the Cemetery Committee. Ernest McKnight served 10 years in the military from January 1968 to January 1974 with oversees combat in Vietnam. After leaving the Army, he started working for the United States Post Office. During his tenure, Ernest was promoted to several positions and after45 years he retired in 2017 as a Postal Inspector. Brother Ernest McKnight’s Masonic travels started over 40 years ago. He was a member in all departments. He served in many leadership positions from Worshipful Master locally to National Commander in Chief 32nd degree. He also received his 33rd degree and was a member of the Council of Deliberation. There are many other services he rendered to our organization. He was known for his wisdom and love for our organization and his brothers and sisters. His service will never be forgotten. (SO MOTE IT BE) As the eldest child, Ernest took his responsibilities of taking care of his family to heart. With his generous spirit and pleasant personality, they considered him as the patriarch of the family and 1000% believed that their big brother, son, father, uncle, and nephew was one of a kind with knowledge of him being SUPERMAN. His wonderful life will forever be cherished in the lives: five children, Taurus McKnight, LaQuatis Flournoy (Allicia), Ernest McKnight Jr., Steven Bymes (Glynnis), and Carl McKnight Sr.; ten grandchildren, Tyler McKnight, Taylor McKnight, Jaylin Warren, Jerlisa Walton, Xavier McLauren (Active Duty Navy), Jeffrey Beasley, Steven Bymes Jr., Sedashia Gilbert (Michael), Kiera Bymes, Mariah Bymes; 6 great-grandchildren, Danielle Smith, Jayden Beasley, Allicia Latesse Beasley, Deonte Bymes, Avery Collins, Steven Bymes III; four brothers, Bobby Smith (Ever), Darrell Sims Sr., Billy Sims (Barbie), Algenon Smith; two sisters, Josephine Varner, Anthonia ‘Peaches’ Mills; an aunt, Patricia White; an uncle, Johnny Lee White; a beloved great-aunt Alberta ‘Aunt Bert’ Sims;a niece/daughter, Uneeda Smith-Sellers (Terrance);a host of nieces, nephews, cousins, other relatives, and friends.

Deacon Ernest Lee McKnight Sr. was born on July 24, 1946, to the late Ernest Lucas McKnight and the late Annie Lee Smith in Locust Grove, Georgia. He was called from labour to reward on March 14, 2020. He was preceded in death by his wife Ernestine... View Obituary & Service Information

The family of Ernest Lee McKnight Sr. created this Life Tributes page to make it easy to share your memories.

Send flowers to the McKnight family.