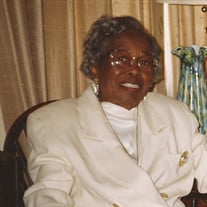 On September 5, 1916, Emma Harris Armstrong was born to Ed and Sarah Berry Harris. She was the third of twelve children born to this union and was affectionately named after one of her mother’s sisters. As a child, Emma was happy, independent and quite adventurous. Like her siblings, she helped with household chores and sharecropping. She attended school and worshipped at the Mt. Olive Baptist Church. Emma married John “Jackie” Armstrong on January 12, 1943 in Brunswick, Georgia. The story of their courtship goes something like this: Emma drove to South Georgia to pick up her brother Oliver. At the hotel where she stayed, she met the owner and her daughter. Jackie was in town visiting his sister during this same time. The hotel owner invited Emma to church with them and asked if she would observe the interaction between Jackie and another lady who also attended the church. The hotel owner wanted Emma’s opinion about which of the two women she observed that Jackie was interested. And, as the saying goes - the rest is history! To pursue a better life for them, Jackie joined the Army and he and Emma moved from Georgia. While serving in the Army they resided at several military bases in Mississippi, Kansas and Iowa, eventually moving to South Dakota during World War II. Through the various moves, Emma developed a love for traveling and seeing different parts of the United States. One of her favorite hobbies was playing tennis with other Army wives while on the base. After settling in the Sioux Falls community, Emma and Jackie’s family grew with the addition of two of her brother’s sons, Ernest and John Robert (Bob) Harris. Now a family of four, Jackie worked as a self-employed mechanic while Emma worked as a Personal Assistant to Mrs. Dorothy Day Davenport. The Davenport family grew to love and respect Emma. Emma joined the Friendship Baptist Church and became an active and supportive member. Later, Emma had two brothers, William and L.H., to join her by moving their families from Georgia to South Dakota. On a regular basis, the families would assemble for Sunday dinners, birthday celebrations, holidays, and the family’s favorite pastime – fishing. “Of course, no one could catch more fish than Emma.” Emma was proficient in shooting a rifle and would often go hunting for pheasants. She would often claim with assurance that she could “out shoot” any man. Emma was actively involved in many civic and community activities and was recognized for her community service. She worked closely with the political campaigns of Senators George McGovern and Tim Johnson. She also hosted a dinner for Dr. Martin Luther King, Jr. during his visit to Sioux Falls. She was featured in several newspaper articles and was often interviewed about changes she had seen and experienced. Other articles included her perspective about race relations, the Martin Luther King “MLK” Day celebration, awards and honors. One of the interviews is available on YouTube. On this video filmed on MLK Day, Emma shares thoughts about the changes she experienced in her 90+ years. The video was discovered by her niece, Saranell, and was shared with the rest of the family at the 2010 Harris Family Reunion. The total number of hits for this video has increased from family members sharing the link with other family members and friends. After the passing of her beloved Jackie in February 1997, Emma continued to remain relevant and active. She regularly attended church and continued to serve in her community. After many years of living independently in Sioux Falls, Emma was faced with a reality that not many face - 98 years old, declining health, and an inability to remain self-sufficient. After receiving an invitation from her niece, Katheryn, to come live with her, Emma agreed to move back to Georgia in September 2014. After returning to Georgia, Emma reconnected with her family and assumed the role of family matriarch; sharing wisdom with all whom she came in contact. Maintaining an active lifestyle was important to Emma. She went fishing with Katheryn and other family members, enjoyed going out to eat, as well as regular visits to the nail and hair salons. She also reconnected with her home church, Mt. Olive Baptist Church, under the leadership of Reverend Dr. Terrance J. Gattis. On any given Sunday, you would find her engaged in conversation with members of her church family as well as attracting the attention of the little ones. Her infectious smile and beautiful hats became a familiar scene at Mt. Olive during Sunday morning worship service. On September 5, 2016, Emma was a celebrated Centenarian and received recognition from President Barack Obama, Congressman David Scott, State, County and Local elected leaders, her biological family and her church family. Emma was a shining crown jewel. She was vibrant, polished, witty and well versed and enjoyed life to the fullest. Whenever questioned about how she was feeling, her response would always be “I feel good every day.” Despite her humble beginnings and struggles, Emma remained positive, happy, but most importantly humble. During the early morning of Sunday, January 13, 2019, Emma received her wings to transition from Earth to her eternal resting place. She heard the call of her Master saying – “Well Done Thy Good and Faithful Servant.” Emma was preceded in death by her father, Ed; mother, Sarah; husband, John “Jackie Armstrong; son, Ernest Harris; and 10 siblings - Elsie, Eddie Lee, Robert, Oliver, William, Mozelle, L.H., Jessie Mae, Mary C., and Robert Lee. She leaves to cherish her memory, a son, John Robert “Bob” Harris (Audrey); 5 grandchildren; 12 great grandchildren; her sister, Mrs. Vera L. Watson, Locust Grove, GA; sister-in-law, Mrs. Eddie C. Harris, Jonesboro, GA; caregivers, Katheryn Lemon (George), Riverdale, GA; lifetime friends, Mrs. Bonnie Williams, Mitchell, SD; Mrs. Betty Fielder and Mrs. Betty Hill, both of Sioux Falls, SD; a great host of nieces, nephews, cousins, other relatives and friends.

On September 5, 1916, Emma Harris Armstrong was born to Ed and Sarah Berry Harris. She was the third of twelve children born to this union and was affectionately named after one of her mother&#8217;s sisters. As a child, Emma was happy, independent... View Obituary & Service Information

The family of Emma Harris Armstrong created this Life Tributes page to make it easy to share your memories.

Send flowers to the Armstrong family.