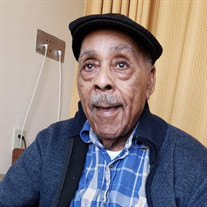 McDonough Chapel Elmer Barnes was born on Thursday, May 18, 1922, in McDonough Georgia to the late Willis and Hattie Barnes. Elmer confessed Christ at an early age and joined the Mt Carmel Baptist Church. He served in various offices and boards of the church. He served as a deacon of the Mt Carmel Baptist Church for at least 65 years. He attended school in the Ola Church School Community, where some of his best friendships were made. On Friday November, 27,1942 he enlisted into the United States Army, Fort Benning, Georgia. His decorations and citations included World War II Victory Medal, American Service Medal, Asiatic-Pacific Service Medal with 3 bronze stars and Phillipine Liberation Ribbon with 1 bronze star. He successfully completed his tour on Sunday, December 4, 1945. On Saturday, September 22, 1951, he was united in Holy Matrimony to the late Sarah Wood. In December 1967 God blessed this union with one daughter, Angelia Monica, who adored and loved them both beyond measure. Elmer was a long time employee of the Atlanta Army Depot (Fort Gillem) where he retired. After retiring he became a long time employee of the W. D. Lemon and Sons Funeral Home, which will always be his family. Elmer enjoyed life. Never met a stranger. Loved his family, his church, his community, his American Legion Post 516 and his Atlanta Braves. On Thursday morning September 12, 2019, he gained his wings. He made a beautiful transition from his earthly home to his heavenly home, with Monica by his side. Elmer was preceded in death by his wife Sarah Wood Barnes, his sisters Nettie, Alberta, Grace, and Willie Ruth his brothers, George and Odell. Elmer leaves to cherish his memories a devoted daughter Angelia Monica; devoted nieces and nephews: loving great nieces and nephews; a devoted friend William M Wade; a devoted grand dog Tyson, and many adopted grandchildren his church family, his military family and so many more friends.

McDonough Chapel Elmer Barnes was born on Thursday, May 18, 1922, in McDonough Georgia to the late Willis and Hattie Barnes. Elmer confessed Christ at an early age and joined the Mt Carmel Baptist Church. He served in various offices and boards... View Obituary & Service Information

The family of Elmer Barnes created this Life Tributes page to make it easy to share your memories.

Send flowers to the Barnes family.