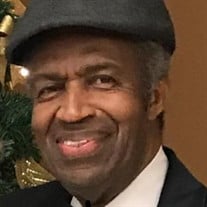 Edward J. Clemons Sr. was born in Jonesboro, Georgia on October 14th, 1933. He was the second son born to the late Raleigh G. and Luella Evans Clemons. He attended public school in Jonesboro. At a young age, he realized the value and necessity of receiving a good education, so he went on to attend Clark College, (now Clark Atlanta University). Upon graduation from college, he was employed by North Carolina Mutual Life Insurance Company in Atlanta Ga., where he quickly excelled in many facets of the insurance industry, earning numerous titles and accomplishments. He helped integrate Georgia State College of Business Administration (now Georgia State University) where he earned the prestigious CLU (Chartered Life Underwriter) degree and the FLMI (Fellow Life Management Institute) degree. His potential was very noteworthy and he was promoted in 1969 to the company’s headquarters in Durham, North Carolina. He was a very dedicated, hard working man with distinguishable work ethics; a stellar example of integrity and devotion. Mr. Clemons was promoted to Regional Director, which put him in charge of customer service for the company. In 1990, Mr. Clemons retired from N. C. Mutual Life insurance Company but continued working with the company, sharing his expertise as a consultant for 3 more years. He dedicated 38 years of his life working for this one company, Although retired, he continued to work diligently in community service with the Red Cross, Community Youth Missions and Senior Citizens Services as well as serving as a member of the Durham Citizens Advisory Council. He was also a proud member of Alpha Phi Alpha Fraternity Inc., BTL chapter, in Durham. Mr. Clemons was a faithful, committed, religious man who never missed church and always held some leadership position. He dutifully took his family to church and worked tirelessly to instill moral values, respect for self and others, honesty and the value of education, hard work and giving back. While in Atlanta, he was a very active member of Ariel Bowen UM Church, and after relocating to Durham, NC he quickly joined White Rock Baptist Church. While at White Rock Baptist Church he was ordained as a Deacon, served as chairman of the deacon board, attained the status of Trustee Emeritus, taught Bible classes, was a Sunday school teacher and was involved in several other ministries of the church. Mr. Clemons met the love of his life, Ellawease James, when they were children, both were competing in a Bible verse contest for their respective churches. Years later, they met again and married while both were attending Clark College. They would have been celebrating their 65th wedding anniversary this year. From that union they had four children; Mrs. Eldred Clemons-Warren (Herb), Dale Dexter Clemons (Pat), Dr. Edward Jacob Clemons, Jr. (Yolanda), Darlene Ellawease Clemons-Shaw. Mr. Clemons will be significantly missed by his family, numerous friends and acquaintances. Aside from his beloved wife and children, Mr. Clemons has one surviving brother, Oscar James Clemons (Carmen), 9 grandchildren, numerous nieces and nephews and a host of cousins and loving in-laws to cherish his memory. Preceding him in death were his parents, his sister, Mrs. Addie Brock; brother-in-law, Henry Brock; brother, Willie Paul Clemons, Sr.; sister-in-law, Mary Louise Bryant Clemons, and brother, Raleigh G Clemons, Sr.

Edward J. Clemons Sr. was born in Jonesboro, Georgia on October 14th, 1933. He was the second son born to the late Raleigh G. and Luella Evans Clemons. He attended public school in Jonesboro. At a young age, he realized the value and necessity... View Obituary & Service Information

The family of Edward J. Clemons Sr. created this Life Tributes page to make it easy to share your memories.

Send flowers to the Clemons family.