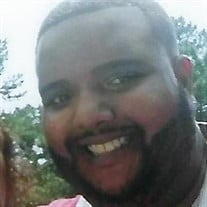 McDonough Chapel Dwight Antonio Helton Jr. was born on Sunday, March 24, 1985 to the late Mr. Dwight Antonio Helton Sr. and the late Mrs. Dianne (Pullin) Helton at Georgia Baptist Hospital of Atlanta, GA. He was the only child of their union. He attended school in McDonough, ultimately graduating with Honors from Henry County High School in the class of 2003. During his school years, he was active in the Boy Scouts, karate, basketball and football. He continued his education at the historic Morehouse College in Atlanta, GA where he majored in Political Science with a minor in Government. Dwight received his Bachelor of Arts Degree from Morehouse in 2007 with Summa Cum Laude, Phi Beta Kappa and was the Highest Ranking Senior in Political Science distinctions. Dwight went on to work with various youth development programs in the Metro-Atlanta area where he served as a mentor, tutor and counselor. He was accepted into the AmeriCorps Volunteer In Service To America (VISTA) Program in the Summer of 2013. Here, he served as a Special Projects and Research Coordinator at the Georgia Center for Non-profits and continued as Program Coordinator for the Smart Lunch, Smart Kid program in Henry County, GA. Under his leadership, the Smart Lunch, Smart Kid Program served over 10,000 meals and provided quality enrichment opportunities for underserved youth in the Henry County. In the Spring of 2016, Dwight was inducted into the prestigious “Teach For America” Program where he served the last 2 years in New Orleans, LA as a 3rd grade Teacher and Interventions Coordinator for grades 3-5. Dwight's future plans included continuing to work with youth development while pursuing a call to the Ministry which he officially accepted on Father's Day 2017. Dwight was accepted as a Merit Scholar and President-Dean Scholarship Recipient into the Gammon Theological Seminary at the Interdenominational Theological Center (ITC) in the Fall of 2018 where he sought to pursue his Master of Divinity Degree. Dwight knew that God was the Author and Finisher of his life and stood forever ready, willing and able to be a humble vessel for God's Will. He was a lifelong member of Wesley Chapel United Methodist Church in McDonough, GA along with his mother and his late grandfather, Ralph Pullin, Sr., where he served as a drummer for the choir. Dwight served as a facilitator and visionary for the THRIVE Young Adults Ministry at Wesley Chapel UMC and wanted to share the word and let people know that God could still work for them and he was relevant to all of our lives. On Wednesday, February 20, 2019, it was the Will of our Father to summon Dwight from his earthly home leaving all cares behind and to enter his new home in glory where his father and mother had gone on before him. The life and legacy of Dwight will forever remain in the hearts of those who loved him so dearly. He will be missed by us all which includes his beloved grandmothers: Mrs. Tillie Pullin and Dr. Geraldine Helton; aunts: Anita Watkins (Bill), Jacques Lee (Sylvester), Sandrae Spencer (Michael Hill), Alfreda Robinson (Larry), Clotell Pullin, Dorothy Ruth Pullin; uncles, Larry Pullin (Valerie) and Derek Pullin; goddaughter, Madison Jackson; favorite cousin/sister, Caressa Spencer and a host of cousins, other relatives and friends. Preceding him in death were his parents, Dwight & Dianne Helton, Grandfathers: Ralph Pullin, Sr. and Robert Helton; Uncles: Ralph Jr. and Melvin Pullin.

The family of Dwight Antonio Helton Jr. created this Life Tributes page to make it easy to share your memories.

Send flowers to the Helton family.