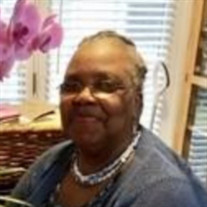 Dorothy Emeline Campbell 04/22/45 – 05/08/20 “For I am already being poured out like a drink offering, and the time has come for my departure. I have fought the good fight, I have finished the race, I have kept the faith. Now there is in store for me the crown of righteousness which the Lord, the righteous Judge, will award to me on that day,” II Timothy 4:6-8. Dorothy Emeline Campbell was born to the late David and Bethelda Barrett on April 22, 1945, in Kingston, Jamaica, West Indies. Dorothy passed away on May 8, 2020, at her home in Covington, Georgia. Dorothy was the youngest child and only daughter in a family of doting brothers, Kenneth Henry, Winston, Lancelot, Carl, Hubert, and Samuel Barrett. In 1964, Dorothy’s first daughter Jacqueline Clough was born. Dorothy emigrated to the United States, arriving in New York in 1967. In New York, Dorothy’s first job was as a nanny, and she later achieved her Associates in Science degree in Nursing from Manhattan Community College in 1975. In 1973, Dorothy met the love of her life, Claude. Claude and Dorothy married in 1975, and had two children together, Deanna and Pamela. Dorothy served as a nurse at Laconia Nursing Home from 1976 until 1994 – seven of those years as a nursing supervisor. She later become a nurse care manager at King’s Harbor Care Center and Hebrew Hospital Nursing Home, respectively. Dorothy’s heart was made for service, and as in all of her relationships, Dorothy treated her patients as the most special people in the world. Dorothy retired from nursing in 2003, and moved to Georgia with Claude. Claude and Dorothy were married for 41 years, and their love sustained through many life changes. Dorothy was predeceased by her daughter Jacqueline in October of 2005, and her husband Claude in December of 2016. Dorothy is survived by her daughters, Deanna Campbell and Pamela (Herman) Woods; stepdaughters, Claudette Campbell and Casandra Campbell; grandchildren Jacquewinea, Tarrianne, Cecilia, Rennique, Ciarra, Arianna, Dawoud, Jalen, and Elijah; and great grandchild Jordyn; as well as a host of nieces, nephews, and family friends to whom she was a supportive and understanding mother-figure. Dorothy treated each of her friends as her very best friend, always showing compassion and sharing a laugh. Dorothy’s life was one of immense connection – to God, to family, and to nature. She was a help to all in need, and it was never a task for her to extend herself to someone. Dorothy welcomed everyone, and to be in her presence was to feel her care and concern. Just the sound of her voice had an instant calming effect, and to know her was to love her, and her love was amplified and returned. Put plainly, as one friend described: Dorothy was a perfect human being. Your life was a blessing, Your memory a treasure. You are loved beyond words, And missed beyond measure.

The family of Dorothy Emeline Campbell created this Life Tributes page to make it easy to share your memories.

Send flowers to the Campbell family.