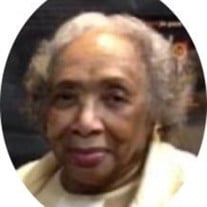 Doris Elizabeth Stovall March 24, 1930 – April 20, 2020 With great sadness, the family of Doris Elizabeth Stovall (née Dennis) announces her passing after an extended illness, on Monday, April 20, 2020, at the age of 90 years. Doris was born March 24, 1930 in Washington, DC, the youngest of three children and the only girl. Her formative years shaped by the end of the Great Depression and the beginning of WWII, Doris graduated in 1949 from Margaret Murray Washington Vocational High School in Washington, DC, where she studied power sewing, served on the school’s first yearbook staff and was a member of the honor society. In high school, she found her amazing singing voice, eventually joining a traveling choir and recording a solo album. As a young woman, her favorite pastime was going to the Howard Theater to hear the artists we now call legends. In 1960, while working at the U.S. Department of Commerce as a computer keypunch operator, she met and married her husband, Joe. A year later, Doris and Joe welcomed a son, Joseph, Jr., and 18 months later, a daughter, Janet. In 1970, Doris moved with her family to Rocky Mount, NC, joining the City of Rocky Mount’s data processing division. She was promoted to police department records clerk, retiring in October 1994 after 24 years of service to the city of Rocky Mount. In 2005, after being diagnosed with breast cancer, she moved to Atlanta to be near her daughter and her two granddaughters. In 2015, at the age of 85, she bought her first house. It was there, on March 24, 2020, that she celebrated her 90th birthday exactly the way she wanted—with fried oysters, white wine and dark chocolate cake. And it was there, a few weeks later, that she eventually succumbed to cancer. Doris did not want those who loved her to witness her passing. So, she stubbornly waited five days for the 20 minutes in which no one was stroking her forehead, holding her hand or kissing her cheek to depart this world peacefully, painlessly in the wee hours of morning. Doris loved music, singing, sewing, classic movies, her brilliant granddaughters and her demonic cat. Her style, sass and potato salad will be missed by her children, Janet and Vallin (formerly, Joseph Jr.); granddaughters, Alexis and Maia; brother-in-law, Orlando; several loving nieces and nephews; and her loving caregiver, Alicia. Doris was predeceased by her husband, Joseph Foster Stovall; her parents Mary Jeanette and Loyal Dennis; her stepfather, Theodore Walker; her brothers, Loyal and William; and her beloved cat, Reagan. At Doris’ request, there will be no funeral. A private celebration of her life will be held at a later date. Her family thanks everyone for their generous gifts, loving words and undying support.

The family of Doris Elizabeth Stovall created this Life Tributes page to make it easy to share your memories.

Send flowers to the Stovall family.