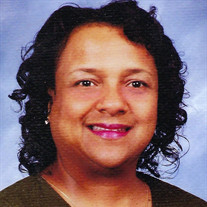 McDonough Chapel NO PUBLIC VIEWING Dianne (Pullin) Helton was born on June 25, 1954 to Mrs. Tillie Lee Pullin and the late Mr. Ralph Pullin, Sr in McDonough, Henry County, GA. She was the sixth of eight children. She attended the historically African-American Henry County Training and Westside High Schools and was a part of one of the first fully integrated classes of Henry County High School graduating with honors in 1972. While at Henry County High, she was a member of the National Honors Society, Student Government Association, Track Team, and won the coveted Ms. Henry County Beauty Pageant. Dianne continued her education at Clark College and Georgia State University in Atlanta, GA graduating from Georgia State in 1976 with a Bachelor of Arts degree in Early Childhood Education. In December of 1974, she married her high school sweetheart the late Dwight Antonio Helton, Sr. After being stationed with Dwight, Sr. in Rome, Italy while he was on a tour of duty as a Commissioned Officer in the United States Army, Dianne returned to the Henry County, GA area to pursue teaching and start a family. To this union, one son, Dwight Antonio Helton, Jr., was born. In the 1979-80 School Year, she began her teaching career at McDonough Primary School where she taught Kindergarten for over 30 years in the same school and classroom for most of her tenure. She even ended up teaching the children of her former students. Dianne loved teaching and all of her students and their families dearly. In 1999, she earned a Master of Education degree from Piedmont College. She continued to teach for more than a decade after receiving her Masters and became a teacher mentor to younger generations of educators. She retired in 2012. Dianne Helton was a lifelong member of Wesley Chapel United Methodist Church in McDonough, GA where she taught Sunday School, served as a youth ministry mentor and chaperone, and sang in the Senior Choir. In her free time, she enjoyed spending time with her family and friends, fellowshipping at church, watching her favorite movies and television shows, reading, and trying new recipes. The life and legacy of Dianne will forever remain in the hearts of those who loved her so dearly. She is survived by her beloved son, Dwight, Jr.; loving mother, Mrs. Tillie Pullin; two sisters Anita Watkins (Bill) and Sandrae Spencer (Mike Hill), two brothers Larry Pullin (Valerie), and Derek Pullin, a host of nieces and nephews, cousins, other relatives, former students, and friends.

The family of Dianne P. Helton created this Life Tributes page to make it easy to share your memories.

Send flowers to the Helton family.