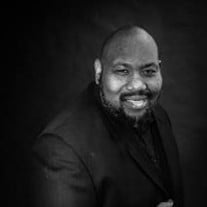 Celebration of Life Services for Corey W. Williams will be held on Saturday, April 17, 2021 at 11:00AM. These services will be recorded and streamed live. In the event the service is interrupted at any time due to technical issues, the entire service will be uploaded and available to view later in the day. Please copy and paste the link to share, or simply click on the link to view the service. https://vimeo.com/536108317 Friday evening, April 9, 2021, Corey Wendell Williams slipped away to life not to death, from sickness and pain to health and immortality. Corey was born on April 5, 1973, to the late Wendell “Tooks” Williams and Carol Batton Canady in Daytona Beach, Florida. He was raised in Tampa, Florida and attended the Hillsborough County schools. Corey began his life journey with a position with the State of Florida Youth Correctional Department in 1992 where he was a Correctional Officer and Supervisor. After he was afforded the opportunity to work in the Food Services Sector of the Army and Air Force Exchange Service in 1997. Corey joined the private sector in the year 2000 when he became a Bar Manager for Roadhouse Grill in Palm Beach Gardens Florida. One day while working at Roadhouse, Corey met his future wife, Kelandra Price Williams. Corey was then transferred to a Roadhouse location in Atlanta, Ga in 2001. June 2002 Kelandra joined Corey and they became engaged on July 26, 2002. Corey and Kelandra were married on July 26, 2003. To this union was born two beautiful daughters. Corey continued his work in the Restaurant Industry until he became disabled in 2009. After Corey was unable to work, he fulfilled his passion for Photography and founded CoreyWendell Photography. His passion for photography was an inspiration for many. He worked mainly behind the scenes, as an assistant for other photographers, taking behind the scenes shots and videographer. He was a favorite with models as he made them feel their best in front of the camera. Corey was a part of various Photography groups that would get together and share ideas, expertise, but most of all they would just shoot! This patriarch leaves to cherish his loving memories: his mother, Carol Batton Canady, Tampa, FL. A wife of 17 years, Kelandra Price Williams, two daughters, Shelby Zuri and Sydney Elizabeth Williams, all of Hampton, GA; two Sisters: Demeteria Peterson Patterson, Lakeland, FL and Nyoka Tooks, Daytona Beach, FL; an aunt, Gloria Dean Robinson Stonecrest, GA; Rebecca Hadley Price, Mother-in-Law, Tallahassee, FL; two nieces: Kirsten Patterson, Lakeland, FL, and Madison Edwards, Daytona Beach, FL; one nephew: Malcolm Curry, Daytona Beach, FL; cousins, a god son, and a host of adopted nieces and nephews.

Celebration of Life Services for Corey W. Williams will be held on Saturday, April 17, 2021 at 11:00AM. These services will be recorded and streamed live. In the event the service is interrupted at any time due to technical issues, the entire... View Obituary & Service Information

The family of Corey W. Williams created this Life Tributes page to make it easy to share your memories.

Celebration of Life Services for Corey W. Williams will be held...

Send flowers to the Williams family.