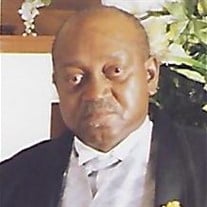 McDonough Chapel On April 2, 1940 Clarence Merritt was born to the late Ethel Lee and Otis Merritt in Stockbridge, Georgia. He was the fifth of six children born to this union and was affectionately known by nicknames “TEA” and “GIANT”. Clarence was called home to glory on February 2, 2019 with his family by his bed side. At an early age he joined the Red Oak United Methodist Church in Stockbridge Georgia. “TEA” was united in holy matrimony on October 15, 1961 to the love of his life, Dorothy Ruth Mitchell for 57 years. In 1962, they were blessed with the birth of their one and only son, Jose Chacon Merritt. Clarence was a down to earth caring man and a wonderful husband and great father. Although trucking was “TEA” first love, ranching and raising his cattle were the next in line. Together Clarence and Dorothy accomplished great achievements. In 1990, they were blessed through hard work and dedication to purchase and managed their own 93 acre cattle ranch and they continued until he departed this life. Clarence was employed with Colonial Freight Systems in Knoxville, Tennessee as an Independent Contractor. “TEA” loved trucking and was devoted to his job and his family. He received the prestigious award from Colonial Freight for driving 3 million miles accident-free and later retired after 42 years of dedicated service. Only to pass the trucking torch on to his beloved son, Jose, to continue the family legacy. He leaves to cherish his memories: a loving wife, Mrs. Dorothy Ruth Merritt; son, Mr. Jose Merritt (Sandra); brother, Mr. Early “Cigar” Merritt; 5 sisters-in-law, Ms. Betty Long, Ms. Martill Asberry, Mrs. Martha Jane Pittman (Homer), Mrs. Georgia Pittman (Harold), and Mrs. Chevy Milford (James); 3 brothers-in-law, Mr. Bobby Mitchell (May), Mr. Randolph Mitchell JR. (Mona) and Mr. & Mrs. Wayne Mitchell (Martha); nieces, nephews, and a host of other relatives and friends.

McDonough Chapel On April 2, 1940 Clarence Merritt was born to the late Ethel Lee and Otis Merritt in Stockbridge, Georgia. He was the fifth of six children born to this union and was affectionately known by nicknames &#8220;TEA&#8221; and... View Obituary & Service Information

The family of Clarence "Tea" Merritt created this Life Tributes page to make it easy to share your memories.

Send flowers to the Merritt family.