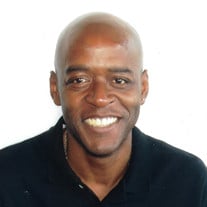 The Family will host their own memorial service. Contact them directly for more information. Alman Howard Jr., affectionately known as "Pooky," entered this world on May 18, 1959 in Chicago, IL. He was eldest of 3 children born to Vernice Howard and the late Alman Howard Sr. While excelling as a straight A student at Our Lady Of the Westside Grammar School, he followed his father's and grandmother's footsteps in music and began playing the Saxophone. Alman attended Providence St. Mel High School, graduating the class of 1977. He was a popular student, even voted best personality. He was a member of the Pep Club, the Discipline Board, the Bowling Club and the Activity Review Board. Inevitably he emerged as a talented Saxophonist starting a band with his friends called The Soulful Struts playing gigs around the city. After graduating, Alman went on to Triton College and Truman College majoring in Psychology. Alman moved to Atlanta, Georgia in 1986 and began his career in mental health as a guidance counselor at Grady Memorial Hospital. He later decided to go out on his own as an entrepreneur and created the printing company "Koop Solutions LLC." In 1988 he became a father welcoming his only daughter and later married in 1993 welcoming two sons. Becoming a family man and watching his children grow, he realized he could no longer deny his passion and decided to return to the mental health field at McIntosh Trail Behavioral Health Center. He remained there as a Drug Abuse Guidance Counselor even as his health began to fade. Alman accepted Christ at a young age serving as an altar boy for many years. As an adult, he rededicated his life and became a member of Antioch Baptist Church North and Ben Hill Baptist Church serving on both the Usher board and the men's choir. After relocating, he became a member of New Vision Christian Church where he remained until God called him home. Alman lived his life as an incredibly valuable asset, not only to his children, family, and friends, but to each and every acquaintance. His honesty, sincerity, and dependability never went unnoticed. His legacy will forever be the definition of an impeccable human being. No longer an angel on earth, but now a Guardian in Heaven. He leaves to cherish his memory a loving mother, Vernice Howard, his daughter and son-in-law Allenisia and Jamal Roper, his sons Christopher Howard and Micah Howard, his sisters Vanessa Howard, and Melinda Sanders, his brother Gregory Howard, his niece and nephew Chiantai and Rodney Pierre, nieces Camra Sanders, and Alexis Walker, his nephews Gregory Howard Jr., Joseph Howard, Damien Howard, Desmond Lewis, Cameron Sanders and Gerald Sanders (Lil' Pooky), and a host of many, many other loving family members and friends.

The Family will host their own memorial service. Contact them directly for more information. Alman Howard Jr., affectionately known as "Pooky," entered this world on May 18, 1959 in Chicago, IL. He was eldest of 3 children born to Vernice Howard... View Obituary & Service Information

The family of Alman Howard Jr. created this Life Tributes page to make it easy to share your memories.

The Family will host their own memorial service. Contact them...

Send flowers to the Howard family.