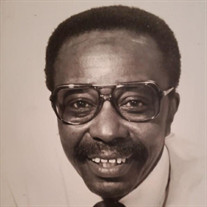 Bro. Aaron Zachary (A.Z.) Cherry, Sr. was born September 25, 1937, in McDonough, GA to the late Ethel Glover Cherry the late James Cherry. He was the third born of five children. He married Lucy (Lois) Elizabeth McMichael on June 11, 1966. From this union four children were born. Bro. A.Z. accepted Christ at an early age, and joined Bethlehem Baptist Church in Locust Grove, GA where he faithfully served in the Male Chorus, on the Finance Ministry, and on the Layman’s Ministry. He was well known in the community and did not meet any strangers as he loved to socialize. He served his community as a member of the City Zoning Board for several years. Bro. A.Z. attended Henry County Training School. He later became employed at Georgia Tech and Delta Airlines. In 1993, he retired from Delta Airlines after working there 28 years. His favorite pastime was playing checkers and joking around with friends “under the tree.” On March 18, 2020, Bro. A.Z. received his wings and departed this life at the age of 82. He was preceded in death by his parents, Ethel and James, his brothers, Clifford and Billy, and his sister, Elizabeth. As a husband, father, grandfather, brother, uncle, cousin and friend, he leaves to cherish his memory a loving and devoted wife, Lucy (Lois); five children, Tina Cherry, Tracey Allen (Aveory), Aaron Z. Cherry, Jr., Dana Jarrells (Cory), and Sherrion Barlow (James); one sister, Marion Miller (A.W.); one sister-in-law, Gladys Rosser; eight grandchildren, Bralin and Ryanne Allen, Alex and Austun Cherry, Adasia Gibbs, Jory and Haleigh Jarrells, and Santrice Jones; and a host of nieces, nephews, cousins, and friends. Following the recommendations of the CDC during the COVID-19 pandemic, the Cherry Family will have a private homegoing service for Mr. A.Z. Cherry. The interment will be public and family and friends are asked to join the family on Tuesday, March 24th at 1:00 p.m. at Bethlehem Baptist Church.

The family of Aaron "A.Z." Cherry Sr. created this Life Tributes page to make it easy to share your memories.

Send flowers to the Cherry family.